Without giving the plot away too much (so that you can enjoy the movie yourself), its about Carl Casper (played by Jon Favreau) who is a chef in a prestigious LA restaurant that struggles to express his creativity with an over-controlling boss. After an embarrassing Twitter incident he finds himself out of a job, and starts his own food truck.   The audience is then taken along a food cooking journey as Carl takes a road trip with his son that helps him rediscover his passion for food.  I especially enjoyed how the social media played an intricate part in the movie and how it truly reflects it’s impact on our everyday lives.

My favorite scene was where Carl makes a Pasta Aglio e Olio for Molly (Scarlett Johansson), and for the past few days I couldn’t get that pasta dish out of my mind.  So I went online and searched for the recipe and tried it last night.  Hubby couldn’t stop telling me how good this “spaghetti with garlic and oil” dish was and asked if it was difficult to make (subtly hinting for me to make this again).

The recipe, along with all the other recipes in the film were developed by Korean-American chef, Roy Choi.  He was one of the pioneers of the food truck phenomena and is well-known for his gourmet Korean taco truck.  He also played a consultant role on the set of this film.

If you’ve seen this movie, let me know if you loved it as much as I did?  If you haven’t seen it yet, a bit of advice: do not go into the cinema hungry.

Boil a large pot of salted water.  Then add the spaghetti, cooking to al dente (8-10 minutes or according to instructions on package). Drain.

Over medium heat in a large pan add the olive oil. Then add the garlic and stir until the garlic is golden in color. Then add red pepper flakes, salt and pepper.

Add the drained spaghetti to the pan and toss until the pasta is coated in the chili oil.

Remove the pan from the heat and add the parsley and Parmesan cheese. Taste and adjust the salt if required. Add the lemon juice to taste.

Plate and garnish with more Parmesan cheese and a few parsley leaves. 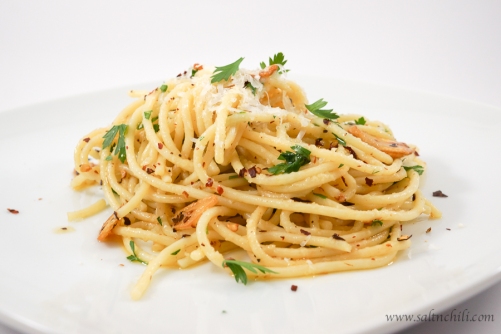 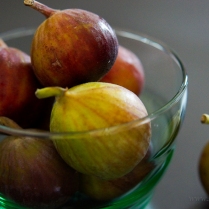